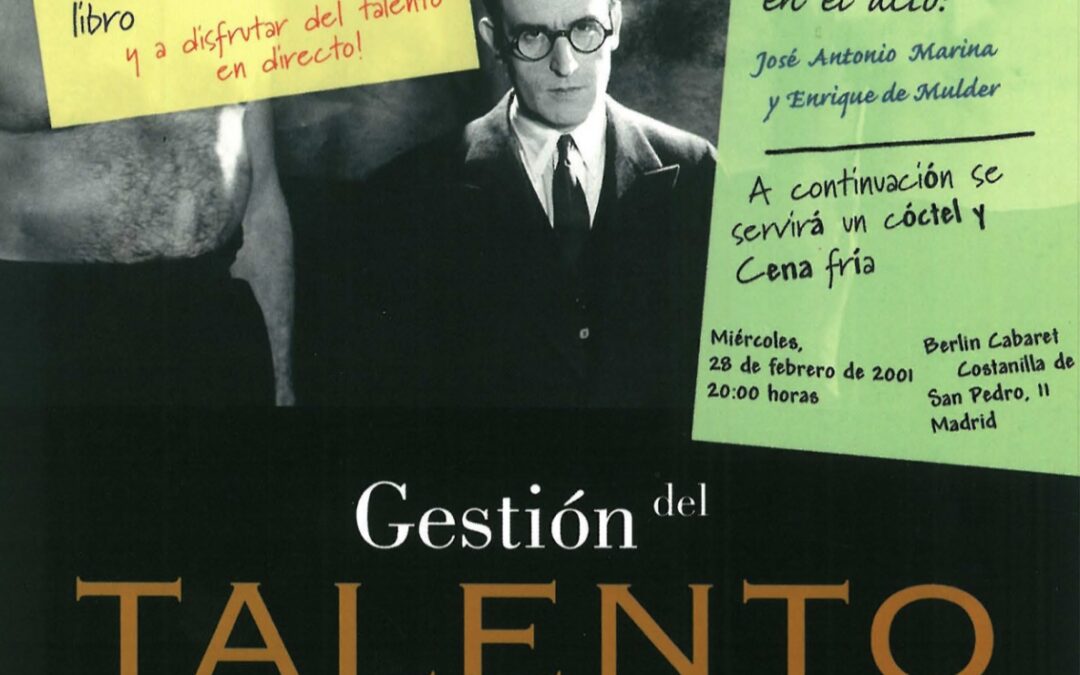 This was my first solo book. I published it in February 2001 and it’s been a whopping 20 years, almost nothing. It was the first manual on the subject published in Spanish and it opened the doors for me as an international speaker (I started very, very young 🙂 )

That year I traveled for the first time to Chile, Argentina (days before the corralito) and Colombia to present it and give conferences and my fascination and affection for Latin America and its people began.

I presented that book in Madrid at the Berlin Cabaret, accompanied by José Antonio Marina, Juan Carlos Cubeiro, Enrique de Mulder and my prologue writer, José Medina. We finished the act with drinks and a show. The waiters were dressed like the ones on the cover. The capacity was 300 attendees and there was a line that doubled it.

As an anecdote I will tell that among those who were left out due to capacity problems were the media and the press (!).

The presentation was a daring and crazy characteristic of the time, of my years and the axis of the book: talent above many other business variables. The beginning of the century marks the Renaissance in organizations, where human beings are more important than machines and processes, and to date, the pandemic has precisely reinforced this message: talent is the most valuable capital of a company.

The book was one of the best sellers of the publisher, I had an adaptation in 2008, 2011, it is still selling today and that was only the beginning of a career that I never imagined. Now with hindsight, I laugh when I remember how I used to dress as an “older”, because I was sometimes embarrassed to be the youngest in a congress. Or how I got very serious explaining data, when in fact the sense of humor accompanied me while I was writing it and I trust that it will never leave me.

I did not want 2021 to end without paying a small tribute to these 20 years. I am very grateful to those who have been reading me and have helped me achieve the great dream since I was little: to be a writer. And my dear Talent Management and its editor, Adriana Gómez Arnau, gave me this opportunity that I remember fondly in the photo of the invitation to the presentation, of the day of the event and a “vintage” video recorded on VHS. As I say, I was very very young 🙂

You can find out more about which cookies we are using or switch them off in settings.

This website uses cookies so that we can provide you with the best user experience possible. Cookie information is stored in your browser and performs functions such as recognising you when you return to our website and helping our team to understand which sections of the website you find most interesting and useful.

Strictly Necessary Cookie should be enabled at all times so that we can save your preferences for cookie settings.

If you disable this cookie, we will not be able to save your preferences. This means that every time you visit this website you will need to enable or disable cookies again.